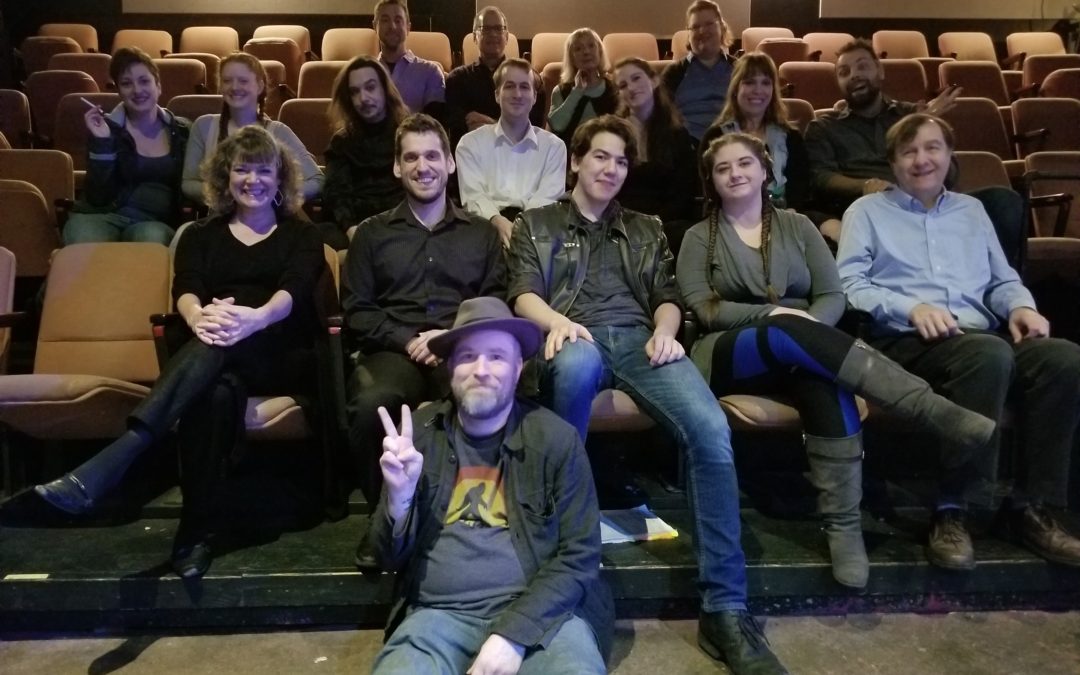 I’m trying to come back down to Earth right now. I’m writing this post at 2:00 am after wrapping closing night of my first staged reading. What a crazy and gratifying week this has been!

I’m writing this post for those of you who love theatre and know there’s an actor in you waiting to come out. Or maybe you’re already acting and don’t know what a staged reading is. I didn’t, when I auditioned for this wild ride.

A staged reading means you have only a few rehearsals before getting up on stage with your scripts still in hand. A full production, a play, typically means about three months of your life with an initial read-through and introduction to your fellow cast members, several nights of rehearsal each week, different acts, slowly moving rehearsals to the stage once the set is built, and then around three weeks of performances for a live audience. (Although of course on Broadway and the like, performances can go for a year, or years.)

I hadn’t been in a show since December of 2015, three long years. You can find my interview with the director, Benjamin, of that show here: https://laurahandke.com/simply-authentic-your-soul-voice-is-calling-pursue-what-you-love-and-love-what-you-pursue-an-interview-with-ben-tissell/

Over the last 18 months or so, I’d auditioned probably five times, and wasn’t once cast. The acting bug was biting me so hard, I auditioned for roles I wasn’t a good fit for and auditioned poorly. There was one good audition in the batch, for a short film, I felt good about. Ultimately, though, the role went to someone else.

So, even though I had no idea what a staged reading was, when I read the audition notice on-line, via a Facebook theatre group, I sent the director my acting resume and headshot. I knew the topics of the readings were abuse, addiction and mental illness – some pretty heavy duty, emotional stuff – and that proceeds would benefit Reimagining Recovery, a peer-support organization designed to help victims of abuse, addiction, and mental illness before the breakdown point where hospitalization is needed.

I was asked to come in and read a monolog. I chose a monolog I’d worked on before, from Marvin’s Room. It’s a great piece, allowing the actress to display a range of emotions from laughter to tears in 15 ½ short lines.

The director said he’d want me for at least the third block. This was an ambitious project, to say the least. Three weeks of staged readings with three different full-length plays and three different casts. Notices and updates about the casting process were sporadic at first, and I got the feeling the director had bitten off more than he could chew. That feeling was correct, as the director – oddly enough, also named Benjamin – shared later himself.

Yet, what an amazing process it turned out to be.

Sometimes you get the script before the audition. In this case, I didn’t get the script until after I’d been cast, still not sure of what role I was playing. I read through the script and initially thought, “What have I gotten myself into?” Two drag queen goats playing with the audience before the show, German accents, a bunch of stuff about healthy goat milk and meat (I don’t even like goat cheese,) puppets, marionettes, sexual abuse, murderous mafia-type guys, a pedophile Irish priest, a drunk, and a lot of profanity. Seriously, the “f” word left and right, and I am not a big swearer.

Still, I found myself in tears after I’d read through the entire script. Abuse can be passed down in a family from generation to generation. But it doesn’t have to be.

I was cast as Linda Kunt, the drunk. Ahem.

I’d never played “drunk” on stage before, not to even mention her name. (At least it was spelled with a K, right?!)

There’s this weird mix of anxiety and anticipation when the cast comes together for the first time. You may not know each other, but you’re in this process together. You have to have each other’s backs. You rely on this person you don’t even know to show up on time and be there for you. It requires enormous trust and commitment, very quickly, in a way unique to the theatre experience.

You get to know each other a little bit through rehearsals.Some wise-crack. Some share other theatre experiences. Some talk in small circles in the dressing room. Some are quiet. Yet all are focused on the show.

This particular closing night was ’ amazing, to borrow words from the script.

And, then, it’s all over. And it feels a little like the end of Christmas day when you’re a kid.

I’m grateful and blessed to have had this experience, and to have been in my home of the theatre again.

If you’re curious about acting, make your authentic voice happy and sign up for an acting class in the new year. It’s a great way to get your feet wet and find out what the process is all about. I may even start a waiting list and offer another Authentic Performance class in 2019! Feel free to share your curiosity and any questions about acting or the theatre you may have on the blog.

Until then, Merry Christmas! Happy Holidays! And a blessed New Year to you and your loved ones.